Dysport is for those who would like to reduce the wrinkles between the eyebrows, or on the forehead, and who want to maintain a natural look. In just a single ten to twenty minute treatment, Dysport can help reduce your frown lines and furrowed brow for up to four months.

Dysport is a prescription injection proven to help smooth the appearance of moderate to severe frown lines between the eyebrows without changing the look or movement on the rest of your face. Like Botox, Dysport is a neuromodulator that targets “dynamic” facial wrinkles, which are caused by repeatedly moving the same facial muscles every day, such as when you squint or frown.
Untreated muscles still work normally, so you can continue to express feelings naturally. It’s the “furrowed brow look” that is minimized, not your expressions.

Which conditions can be treated?

Dysport injections are used to provide patients a temporary correction of moderate to severe facial lines and wrinkles around the eyes and between and above the eyebrows. Please ask your expert injector about all the ways Dysport can help you.

Is Dysport right for me?

If you have “dynamic” wrinkles, such as those that form when facial muscles contract repeatedly, forming creases across the forehead, at the outer corners of your eyes (crow’s feet) and between the eyebrows, Dysport can help. The reason they are called dynamic is because they are formed by repeated facial muscle movements over many years. A small injection of Dysport in just the right places weakens those muscles, allowing them to relax, and greatly reduces the wrinkle. However there are a number of situations where this treatment may not be right for you, such as if your wrinkles can’t be smoothed by spreading them apart, you have droopy eyelids or sagging eyelid folds or if you have had surgical changes to your face.

Some typical results after being treated with Dypsort 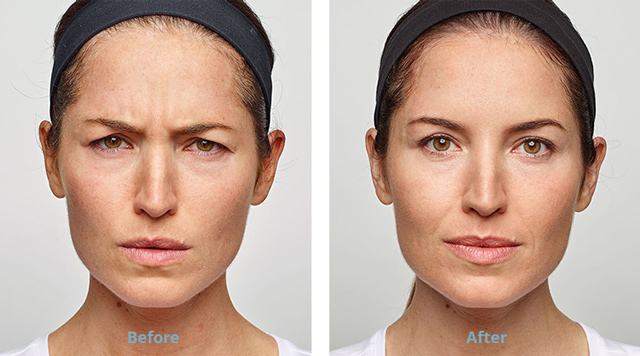 How do I prepare for treatment?

Medications that could increase bruising (blood thinners) such as non-steroidal anti-inflammatory drugs (NSAIDs), vitamin E, fish oil, supplements with turmeric, and aspirin should be discontinued a few days before any injection to diminish the risk of bruising. It is best to stop taking any non-prescribed medications and supplements. Drinking alcoholic beverages the night before and the day of the treatment is also not advised for the same reason.

What happens during the procedure?

The treatment area will be cleaned with an alcohol wipe to prevent infection. Sometimes we use a local anesthetic such as lidocaine to numb the treatment area, but often Dysport can be injected without the use of numbing cream, due to the ultra-fine needle size. Please talk to your practitioner if you are concerned about pain. The treatment process usually involves one injection into each of five sites that run above and between the eyebrows, with total time for the appointment as short as 10 to 15 minutes.

Some redness and swelling after a Dysport injection is normal. You can gently apply ice or a cold gel pack to help reduce swelling and potential bruising. You make take Tylenol or other acetaminophen to help with any mild discomfort. You should wait at least four hours before lying down to avoid the risk of pressure on the treated areas. The area receiving the injection should not be rubbed as it can potentially cause the Dysport to spread to other areas of the face. Finally, please abstain from vigorous exercise or yoga-type positions where your head is below your heart as this can exacerbate swelling.

How long until I see results?

You do not have to wait long to see results when treated with neuromodulators such as Dysport as the majority of patients see improvement in just two to three days after treatment. However it can take up to two weeks for the full effects to show.

How long will results last?

One treatment of Dysport can last for up to four months and the effects of repeated treatments is comparable to the first use.

Over time, the muscles above and between the eyebrows repeatedly contract and tighten, causing wrinkles. Dysport works beneath the skin’s surface and targets the underlying muscle activity that causes furrowed brows and crow’s feet to form over time. Normally when we squint, frown, or make other facial expressions, our nerves releases the neurotransmitter chemical acetylcholine. This organic compound binds to receptors within the muscle to make it contract. Wrinkle relaxers like DYSPORT work by binding to the acetylcholine receptors, which blocks the signal from the nerve to the muscles.

After a muscle has been injected, the nerves still send the signal to the muscle to contract, and the acetylcholine is still released, but it is unable to bind to the muscle, resulting in a reduction of muscle activity and temporarily preventing contraction of the muscles that cause frown lines. For Dysport, the binding process typically begins within about two days from the time it is injected, and the results typically become noticeable within three days, with full effect in around fourteen days.

Can this treatment be used as part of a combo therapy?

Dysport treats dynamic wrinkles created by muscle movement, and dermal filler treats static wrinkles caused by loss of collagen and fat in the tissue, so these two treatments are often combined. We are experts at helping you select the best of these treatments for the optimal results.